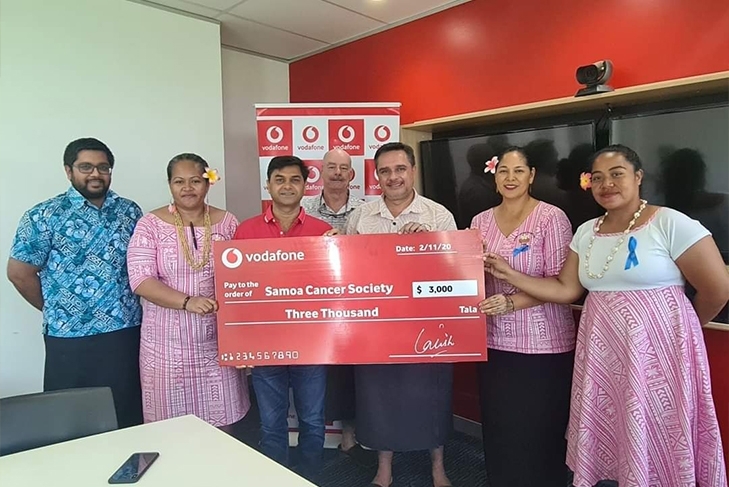 Vodafone Samoa raised awareness throughout the month of October about the importance of the early detection of breast cancer among the community and its employees. The initiative comes as part of Breast Cancer Awareness Month, a worldwide campaign observed annually in October, seeking to highlight the importance of breast awareness, education and research called “Pinktober”.

“We’re always more on community support and spreading awareness about breast cancer is our responsibility as a company that puts its people’s well-being at the heart of everything we do. Every year in October, we stress the importance of early detection and are committed to continue raising the awareness, We turned our advertising pink in remembrance of those who have passed on and to stand in solidarity with those who have been affected by this nasty disease one way or another.” Vodafone Samoa CEO Nofoasaefa Satish Sharma says.

Under Vodafone Samoa’s corporate social responsibility umbrella, the telecom leader encouraged its staff to support and used its advertising mediums such as its SMS Broadcasts, social media, radio talk back shows and print media to assist the Samoa Cancer Society in raising awareness about early detection and the importance of regular screenings.

“I cannot say enough about how important this partnership is. It’s even more special because it’s more than a partnership to all of us; it’s a friendship – the synergy of what we’re doing at Samoa Cancer Society and what Vodafone does within our community is so important and it works well. Because we have the same community focus; we’re trying to make the space that we live in just a little bit better and when we take this view in making the community better, we find these commonalities that is a blessing to us. This community focus wouldn’t be possible for us without the help of Vodafone. That’s why I say it’s more than a partnership, it’s a friendship.” Says Su’a John Ryan, Samoa Cancer Society CEO

Vodafone are the official telecom partner and have been avid supporters towards the Samoa Cancer Society since 2015. This year through its awareness and fundraising platforms Vodafone raised a total of $3,000 tala. Vodafone is proud to say that most of the funds were from Vodafone staff who whole heartedly, every year go out of its way to pink out its department floors, dress in pink every Friday and donate. This year (for the first time) Vodafone had configured its M-Tala platform to enable customer convenience so Vodafone customers can donate from anywhere and at anytime.

“Faafetai tele lava for the donation, it’s important for us as an NGO that’s always struggling to fulfill the mission that we have, hence every sene helps as it enables our team to go out and do what we do to help patients and the families of those affected,” continues Su’a John Ryan, Samoa Cancer Society CEO

Staying on the digital track (another first for Samoa) Vodafone had configured a Quiz Hunt game using QR code which enables customers to scan, read educational information about the importance of early detection and prevention methods, and answer questions via SMS to go into the draw to win 1 of 3 Samsung A10s handsets. Customers can find the QR Codes at every Vodafone Retail Stores, ANZ ATMs and inside ANZ plus many more. The more a customer texts in, the more their chances are of winning a brand new Samsung handset.

“We wanted to try something new this year; to help with awareness & educating our customers on the importance of early detection. And so our team has come up with a new way to engage the public by using QR Codes. Customers will not only learn, but also for fun can go into the draw to win 1 of 3 Samsung A10s handsets.” Says Nofoasaefa Satish Sharma, Vodafone CEO.

Vodafone Samoa’s QR Hunt will continue on until the end of November to help raise awareness for Movember – an annual initiative which takes place in November to help raise awareness on men’s prostate cancer. The QR Hunt Initiative is available only to Vodafone customers; whoever is on another network and would like to participate would need to uplift a Vodafone Sim from any Vodafone Retail Store. The lucky winners will be announced at the end of November.

“This isn’t just for the month of October, this is an ongoing engagement whereby our team will continue to go on and do patient visit and support those that have terminal cancer. And what you (Vodafone) provide enables us to do so much more. Thank you Vodafone for being a blessing to us and to those who will receive this helpful donation.“ concluded Su’a John Ryan, Samoa Cancer Society CEO