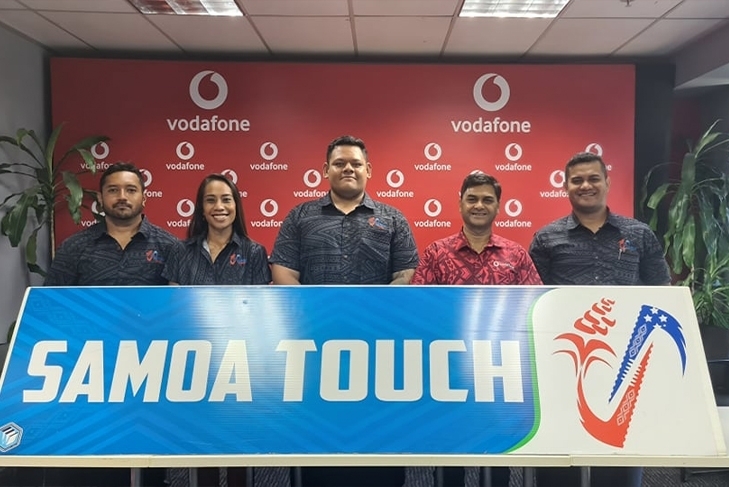 Vodafone has announced naming rights partnership of the Vodafone Samoa Touch Rugby Incorporation (STRI) has been extended by another year. The partnership started in the mid 2018 and Vodafone is delighted the relationship is continuing.

“We’ve supported the Vodafone Samoa Touch Rugby Inc through thick and thin, and we are proud to be making another commitment to this fantastic sport that unites and connects fans and communities from every corner of Samoa like no other – much like our network!” says Vodafone Samoa CEO, Nofoasaefa Satish Sharma.

“Samoa Touch is truly grateful for the opportunity to continue the partnership with Vodafone Samoa. It is a partnership aim to serve our touch community and to help develop and promote the sport of touch in Samoa.” Says Mailata Michael Wulf President

During Vodafone’s sponsorship era, the Vodafone Samoa Touch Rugby Inc have had the opportunity to represent Samoa Touch on an International Level in Malaysia for the Touch World Cup in 2019 whereby the Samoa Touch Mix Open came 4thoverallMens came 9th overall and the Womens Touch Rugby Team came 2th overall. And again in the Pacific Games hosted in Samoa 2019, all Samoa Touch Division won 3 silver medals.

Since the introduction of Touch in Samoa back in 1993 our drive is to take the sport to a level whereby we can continue to be one of the leading community sports and focus our efforts on growing our player base both elite squads AND general participation and enhance our commercial value. This will help support Samoa’s focus across its Sports Sector of producing world class sportsmen and women that achieve at an International level for Samoa. But also help increase physical activity to combat the rise of Non-Communicable diseases in Samoa, promote gender equality, inclusiveness and educational achievements. We hope to continue to strengthen our Players, Coaching and Refereeing Pathways so that we can support our Schools and particularly Clubs with quality player, coaching and referee recruitment and retention to ensure we have a consistent pool of talent & elite players and quality officials.

“We have seen the commitment put forth by the Samoa Touch Inc to host local tournaments in order to keep developing this sport here in Samoa; it’s a fun atmosphere at every game and (like our network) this sport is for everyone. We’re excited for what is to come and we wish STRI all the best on all its initiatives.” Concluded Vodafone Samoa’s CEO, Nofoasaefa Satish Sharma.

Staying true to its newly launched “Always more” Campaign, Vodafone (since its launch date) have well invested over $370,000 tala worth of monetary and in-kind support within our Communities and the Global Telecom Giant is saying it’s only just the beginning.